When you look at a Jefferson Nickel today, you may see it as simply pocket change, however in 1942 through 1945, this coin’s composition was changed, thus playing a significant role during World War II.

To really understand its significance, we should first take a brief look at the history of the Jefferson Nickel itself. The Indian Head Cent or Buffalo Nickel had reached its 25-year statutory required minimum life. Although beautiful, this coin was difficult to mint, so the United States treasury was anxious to replace it. The Mint conducted a design competition in early 1938, requiring that Founding father Thomas Jefferson be depicted on the obverse, and Jefferson's house Monticello on the reverse. Out of almost 400 artists participating in the competition, Nellie Tayloe Ross, Director of the United States Mint selected Felix Schlag's design for the new Jefferson nickel five-cent piece.

Felix Schlag was born on September 4, 1891, in Frankfurt am Main (Frankfurt on the Main River), Germany but moved to the United States in 1929. Schlag had established himself as a master sculptor as well as an award-winning artist in Europe having won at least a dozen awards by 1926. He was selected to create the Jefferson Nickel in 1938 and won $1,000 for his winning design of the United States five-cent coin. Unfortunately, the money arrived shortly after his wife’s passing and it is said that he has to use his prize money on his wife's funeral.

About the Original Jefferson Nickel:

The coin's obverse design shows a close-up profile of founding father Thomas Jefferson with the words “In God We Trust“ encircling the rim to the left and “Liberty” along with the mint date to the right. As either a misunderstanding or an oversight, Schlag did not include his initials in the original obverse design; however, they would be added 28 years later in 1966.

Schlag's original design on the reverse showed a three-quarters view of Monticello, including a tree. Officials disliked the lettering Schlag selected. It was a more modernistic style than that used on the eventual coin. The tree was another source of official displeasure, it was a palm tree and officials incorrectly believed Jefferson could have been growing such a thing. Schlag changed the reverse to a plain view or head-on perspective that we see today with the Latin phrase “E Pluribus Unum” along the rim’s top, the identifier “Monticello” under the building, the denomination “Five Cents” below that, and United States of America along the bottom rim. 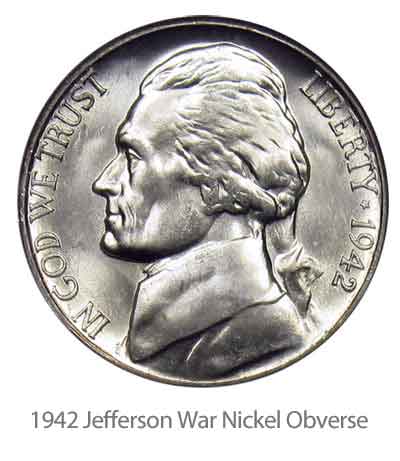 With the onset of World War II, the United States needed war materials and prompted the rationing of many commodities bringing about several home front changes not seen in previous conflicts. Two of these were rationing and recycling. Imported foods such as coffee and sugar were rationed. Scrap metal was recycled and scrap metal drives were extremely common. Even Automakers stopped the production of cars during the war and turned their resources to military needs such as trucks, tanks, jeeps, and weapons. To officials, the composition of the Jefferson nickel was the worst of all worlds. The Jefferson nickel used both copper and nickel, and both were potentially strategic needs. During those war years, nickel was so valuable to the effort that it was actually preferable to substitute silver in its place for the relatively new five-cent coin. Instead of the traditional 75% copper and 25% nickel alloy normally used, throughout the war years, these five-cent coins were made from 56% copper, 35% silver, and 9% manganese.

On October 8, 1942, Congress ordered the removal of the nickel-metal from the five-cent piece. This allowed the saved nickel and copper metal to be shifted to the industrial production of military supplies. An interesting collector’s note, the Silver War Nickels minted from 1942 to 1945 creates a collectible short set within the broader series. From October 1942 through the end of 1945, five-cent pieces still bore the Schlag design, but minted from an alternative alloy, becoming known as emergency coins or War Nickels.

It was anticipated that these emergency coins would be withdrawn from circulation after the war, so a prominent distinguishing feature was added. Coins from all three mints bore very large mintmarks on the reverse above the dome of Monticello. The mintmarks “P”, “D”, or “S” were used for the Philadelphia, Denver, and San Francisco Mints. Interestingly, while U.S. coins had been produced in Philadelphia since the country's first Mint opened there in 1792, these coins traditionally were distinguished by the absence of any mintmark - the use of “P” for a “Philadelphia” mintmark is a feature unique to nickels made during World War II, until the practice became standard on all coins (except cents) in 1982.

Silver Jefferson Nickels were produced through 1945, after which point the composition would revert to the previous standard. During the four years of production, the US Mint had struck more than 870 million of the 35% silver nickels. A complete set will include 11 coins, 1942 P-D, 1943 P-D-S, 1944-P-D-S, and 1945 P-D-S. The 1942-P Silver Jefferson Nickel was also struck in proof format with a mintage of 27,600 coins. All coins remain readily available even in uncirculated grades, although some issues are more difficult to find with full steps.

Ironically, as a young man, Schlag, the coins designer, served in the German army during World War I.

Each war nickel contains 0.0563 troy ounces of silver, so, naturally, War Nickels coins are going to be worth more than five cents. Because of their silver content, the value of Wartime nickels fluctuates with the changing silver prices. Today, circulated wartime nickels bring a premium over face value just for their silver content and the varying price based on the market value of silver. War nickels are easily identifiable by their bright silver appearance when new, and dark gray toning that develops when worn. For many years there was very little special attention for the war-year nickels because they were available in virtually all grades. Today, with its special composition and change in mintmark location, war nickels are highly collectible and take their place with the 1943 Lincoln cent as one of the very few issues of the United States that could actually be tied to a specific national crisis.

IF YOU ARE INTERESTED IN BUYING OR SELLING SILVER WAR NICKELS, CONTACT U.S. COINS AND JEWELRY, HOUSTON'S MOST TRUSTED SOURCE, AT 8435 KATY FREEWAY IN HOUSTON OR CALL 713-597-6367.