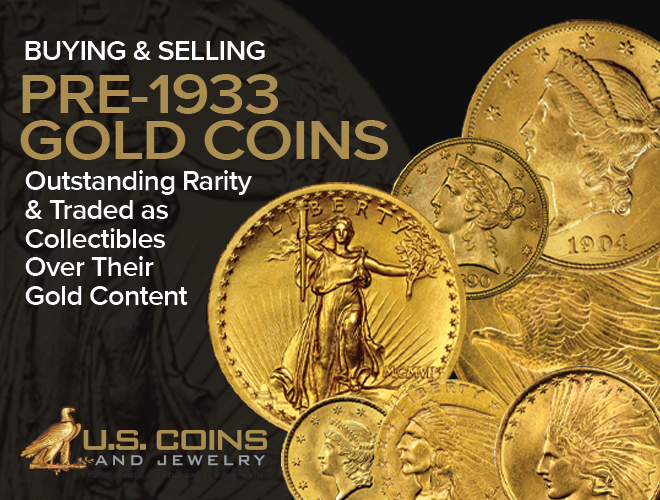 The phrase “pre-1933 U.S. gold” literally encompasses all gold coins minted by the United States Mint since its inception in 1792. This includes all monetized coinage and were produced in denominations of one dollar, two and a half dollars, three dollars, four dollars, five dollars , ten dollars, twenty and fifty dollars. Many of these have outstanding rarity and trade as collectibles at immense premiums to their gold content. However, the terminology of “pre-thirty three” is used colloquially usually referring to the more common examples of the group. These coins trade at levels in closer proximity to the value of the gold content. Common dates and denominations of these coins are used by precious metals investors to add numismatic value to their holdings.

Since 1986, the United States has produced a series of bullion items that are monetized, but trade as a commodity and the “pre-thirty three” language further differentiates these coins from the circulating gold coins that were produced from 1795 until the early 20th century.

Production was halted and gold coins were confiscated in 1933. President Franklin Roosevelt was dealing with the collapse of the U.S. economy, the Treasury’s inability to increase the supply of paper money and the overall ravishes of the Great Depression. His infamous Order 6102 declared all gold coins, bullion and gold certificates to be surrendered to Federal Reserve Banks in exchange for circulating paper money at a fixed rate of $20.67. Small amounts of gold for use in jewelry and art along with collectible coins were exempt from this decree. The Order was aimed at bankers more than individuals, and was intended to keep banks from making the exchange and profiting from the physical gold by selling it overseas. The results were mixed. A number of subsequent laws altered the original intent and legislative battles continued for the decades. The ownership of gold as a commodity was finally made legal again in the early 1970’s, and the U.S. Mint began selling bullion coinage in 1986. Regardless, the affects and the debate over the confiscation rages on today and subsequent state and federal tax legislation continue to be introduced.  Regardless, modern investors turn to the more common date coins of this bygone era as monetized bullion. They invest in gold relying on the protection of the numismatic premiums and the commodity as a collectible to guard against spot price fluctuations and any new confiscation orders.

As mentioned the literal grouping of pre-thirty three coins number in size and denomination, but the most common of these comprise the eight piece gold set. This investor friendly group features the more common dates from the Liberty denominations of $20, $10, $5 and $2.5, the Indian denominations of $10, $5, $2.5 and the famed Saint Gaudens $20. The other types and denominations trade at collector premiums, while the coins mentioned above sell in closer proximity to their precious metal content. All eight of these are struck in 90% gold and have fixed weights within their respective denominations. Of course all the coin series mentioned have better dates that are sold at rarity driven values, but each contain more readily available issues that trade at fixed “generic” prices. These prices change daily. For more information on which of these is right for your needs, and current market levels contact us directly via email or phone, or stop into the store and speak with one of our qualified staff.