Numismatics After The Civil War

In the decades following the Civil War, the United States emerged as an industrial giant. Old industries expanded and new ones, including petroleum refining, steel manufacturing, and electrical power, emerged. Railroads expanded, bringing even remote parts of the country into a national market economy. As the nation entered the year 1877, fresh from its Centennial Celebration, the statehood of Colorado (the 38th State) and the horrific loss of life at the Battle of the Greasy Grass (better known as the Battle of the Little Bighorn), it had to contend with many issues. Leading headlines during the last reconstruction year of 1877 were the Indian Wars with the Lakota, Northern Cheyenne and Arapaho; the “Compromise of 1877,” which resolved the 1876 presidential election, with the selection of Rutherford B. Hayes as winner, over popular vote winner Samuel J Tiden; and the continuing economic effects of the “Long Depression” from 1873 to March of 1879.

However, to the Numismatist of today, the rarities produced during 1877 are plentiful. The date is famous in the Indian Head Cent, Three Cent Nickel (Proof), Shield Nickel (Proof) and Twenty Cent (Proof) denominations. When asked, “What is the most rare or exciting coin of 1877?” most coin collectors would answer “Oh, without question the 1877 Indian Head Cent!” While this coin is rare and very popular for many reasons, it is relatively common compared to gold coins minted in this era. In fact, the production of minor gold coins in the 1870s was often random at best. 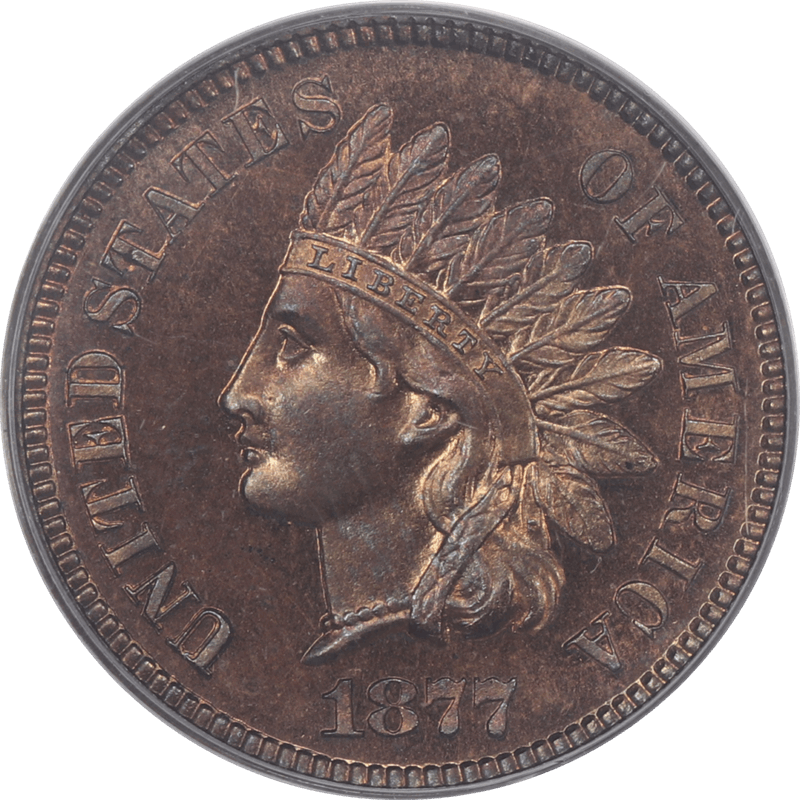 The reason for this is related to the “Long Depression.” According to Walter Breen, “Except for 1873, even Philadelphia (gold) coins are rare prior to 1878. Until that year, specie payments were still suspended, gold was hoarded, and paper currency circulated instead, with the same goods or services on a two-tier pricing system: Prices were always quoted higher in greenbacks than in gold.”

Such is the case in 1877. The Philadelphia Mint struck the following quantities of gold coins:

At the time, very few of the numismatists of the era were interested in gold coins. Also, the numismatists that did collect gold coins, preferred proof coins over coins struck for general circulation. Thus, non-proof coins entered commercial channels with very little notice. The gold coinage from 1873 to 1878 was used heavily for many years. With the exception of the gold dollar, these coils are among the rarest of the post 1859 gold issues with the half eagle and eagle much more difficult to obtain.

For this reason, many of the US gold coins issued during the “Long Depression'', especially half eagles and eagles, are sleepers in the Liberty Head Gold series. Many savvy modern numismatists have quietly purchased these dates when they have appeared for sale. Still, they are sold on occasion and one can still purchase them at reasonable levels in relation to the common dates in the 1890s and later.

At U.S. Coins and Jewelry we carry beautiful Gold Coins. Be sure to check them out by clicking here.